The 5 “Border Corners” of Australia 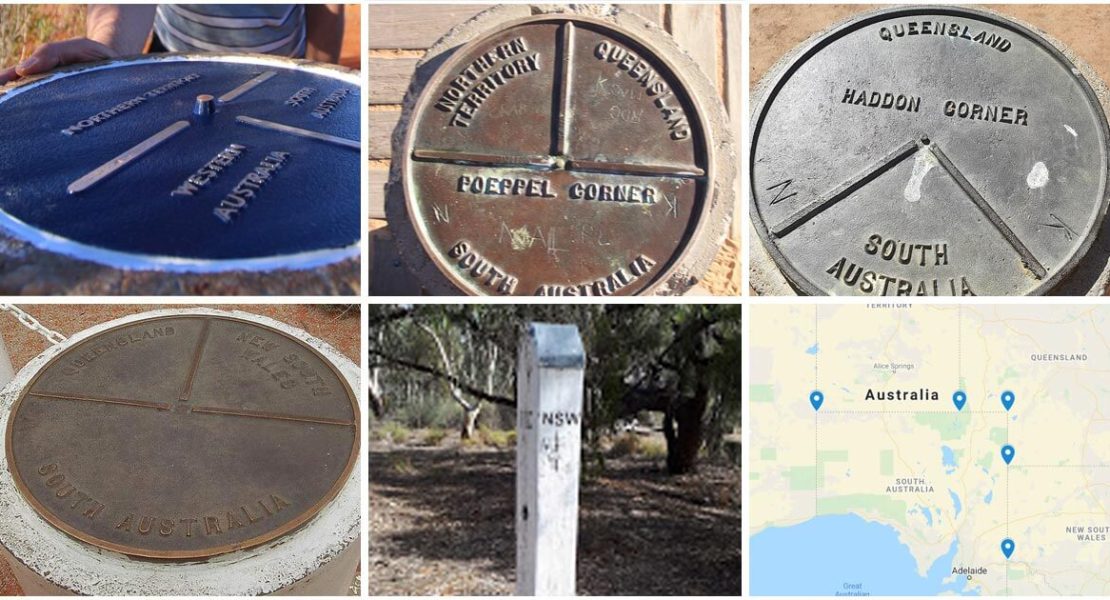 If the red centre of Australia is known for anything, it is nothing. Endless, remorseless, perfect nothing. Sure, there are the big ticket items – Uluru, Lake Eyre, Kings Canyon – but in a space about as big as Europe, these highlights are noticeably few and far between.

So Australians, being resourceful folk, made their own sights to see.

The Australian mainland is made up of five states and two territories. There are five notable points, all found in the centre of the country, where these states and territories meet. These so called border corners represent some of the more hardcore Australian sightseeing challenges – the right equipment and attitude are often required to reach them.

But the payoff, as far as bucket list bragging rights are concerned, is huge.

Looking on a map you’d assume that the Western Australian border is one long straight line, stretching from the top of the country to the bottom. But arriving at Surveyor Generals Corner you will realise that is not in fact the case. The WA border actually has a 120m eastward kink, wrapping around the Northern Territory before meeting South Australia.

You’ll need two permits to get to Surveyor Generals Corner: a Great Central Road transit permit, and a special permit to enter the Irrunytju (Wingellina) Community. A four wheel drive track swings off the Great Central Road, and gets you to within 600m of the marker. From there it’s a short walk over the red dirt.

Perhaps the remotest of the remote border corners on this list, Surveyor Generals Corner grants you a fantastic opportunity to learn about Australia’s first nations peoples. Take the chance to speak with members of the local Irrunytju community; understand their way of life, and how they live with the land, rather than off it.

Found at the meeting point of South Australia, Queensland and the Northern Territory, Augustus Poeppel conducted a survey in the 1880s to find this point. Unfortunately he got it wrong, as his measuring chain was a few centimetres too long. No matter, because he still got naming rights, even after the post was moved.

From the famous Australian outpost of Birdsville, Poeppel Corner is a 166km/2.5 hour 4WD adventure west through the Simpson Desert Conservation Park. Don’t let the greens and blues used by Google Maps fool you – the palette here is exclusively desert red and salt lake white.

The Simpson Desert Conservation Park is perhaps the finest example of Australian outback nothingness. This oblivion can make for a cathartic, meditative and oddly thrilling experience, knowing that you’re far from everything and everyone.

The only border corner on our list to feature just two states, Haddon Corner marks the northeast corner of South Australia, carving a deep cut into Queensland.

When compared to the first two, this corner is quite simple to get to. From Birdsville you will this time head east on Eyre Developmental Road for a little over 200km, before turning first south and then west in the last 50km. After three hours you’ll arrive at this comparatively popular post.

Use Birdsville as your base, and aim for the first weekend in September, when people from all over Australia come together in its centre for one of the most unique horse racing events in the world, the Birdsville Races.

Perhaps the best known and most popular corner of our five, Cameron Corner is the meeting point of South Australia, Queensland and New South Wales. Found on the edge of Sturt National Park, this rockstar even has its own on-site corner store, famous for its eclectic collection of visitors’ hats.

Cameron Corner can be attacked from a number of directions; Innamincka a four hour drive to the north, Broken Hill five hours to the south, or Bourke six and a half hours to the east. A four wheel drive is recommended for each of these routes.

The desolate landscapes of Sturt National Park are stunning, particularly those found on the Gorge Loop Road and the Jump-Up Trail.

Our final and somewhat odd corner doesn’t sit where certain people think it should. This is because of a border dispute between NSW and Victoria, which ended in Victoria extending 3.6km further east than NSW. The true border corner also sits in the middle of the Murray River, 100m from the marker.

MacCabe Corner is the most conveniently located of all five corners, being an easy half hour drive from the rural hub of Renmark. When standing at the marker you’ll be on Victorian soil, looking across the Murray River at South Australia on the left hand side and New South Wales on the right.

The attractions come thick and fast around MacCabe, particularly when compared to our other, more barren corners. On the South Australian side the riverland serves up endless opportunities to waterski and birdwatch, while the winemakers over the border in Victoria, particularly Trentham and Oak Valley Estate, are incredible.