Where can I see Australia’s most famous animals? 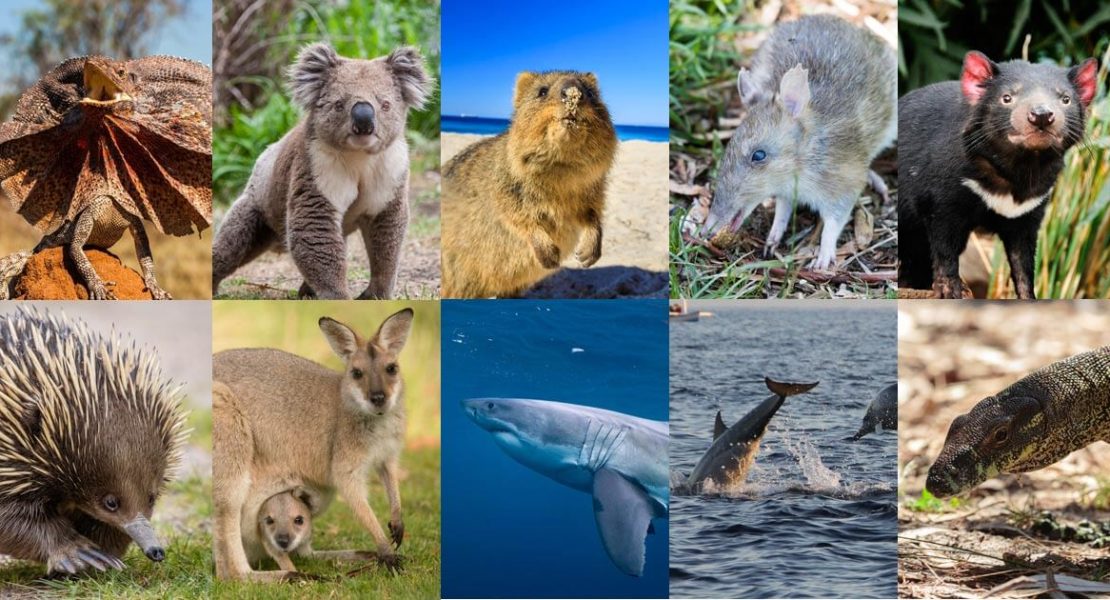 Cut off from the rest of the planet for millions of years, the wildlife of Australia is amongst the most unique in the world. Aussie animals, particularly the famous marsupials, are also super cute – there’s nothing like a photo of a kangaroo, koala, wombat, platypus or quokka to get the comment section filled with awwwwws and ❤️❤️❤️.

Ok, visit Sydney & Melbourne, but a trip down under isn’t complete without some close encounters of the fauna kind, so where, pray tell, are the best places to see Australian wildlife? Where can I hold a koala? Where can I cuddle a wombat? Where can I feed an emu, swim with a shark or ride a kangaroo? (hint: nowhere)

Let’s take a look at a few of Australia’s most famous locals, and where to go to enjoy a close encounter with them.

What is a Bilby

Otherwise known as rabbit-bandicoots, bilbies are cute, shy and very rare. They live in Australia’s red centre, and are 55cm long excluding their thin tail. In Australia the Easter bunny is commonly referred to as the Easter bilby.

Where can I see a Bilby?

There are so many beautiful Australian animals, and then there’s the cane toad, which is neither beautiful nor Australian. Introduced in 1935 to control the cane beetle that was decimating sugar cane crops, cane toads have proved a far bigger pest than their original target.

Where can I see a Cane Toad?

This little critter won’t be displayed in any zoo or sanctuary, but if you drive up the tropical coast of Queensland, or into the Northern Territory or the north of New South Wales, you won’t have to look hard to find one.

What is a Cassowary

The third tallest and second heaviest bird in the world, cassowaries patrol the tropical forests of northern Australia. They are often labelled as ‘the world’s most dangerous bird’, because while they’re shy, they can also unleash a fearful attack if threatened.

Where can I see a Cassowary?

The world’s largest living reptile is an intimidating beast. The saltwater crocodile is found in the north of the country, and can grow up to six metres and 1000kg. Keep an eye out for warning signs on beaches and in estuaries, as these animals are best seen under controlled conditions!

Where can I see crocodiles?

What is a Dingo

Australia’s only native dog hasn’t been native for long – the oldest dingo fossil found so far is only from 3500 years ago, suggesting that the species may have arrived by boat with humans from Southeast Asia. A wide, large head, and a lithe, athletic body are the dingo’s hallmarks.

Where can I see an Dingos?

Dingoes are dogs, which means that they can be – and have been – domesticated and interbred, and are popular on farms and stations. If you’re lucky you might spot one in the wild, or you can visit a rehabilitation centre like the Dingo Sanctuary in Bargo, NSW. If you go to Fraser Island, you’ll be sure to see Dingos in the wild.

Australia is home to a number of dolphin species, including bottlenose dolphins, snubfin dolphins and Adelaide’s Port River dolphins, the only wild dolphins in the world to live within a city.

Where can I see dolphins?

What is an Echidna?

Part hedgehog, part anteater, 100% cute, echidnas are small marsupials covered in coarse hair and spines, which waddle through the Aussie undergrowth in search of ants and termites. Along with platypuses, they are the only living mammals to lay eggs.

Where can I see an Echidna?

What is an Emu?

Second only to the ostrich in terms of height, the emu is one big bird! While flightless, they can sprint at an incredible 50kph. Emus are spread across the Australian mainland, found everywhere from tropical forests, to deserts, to southern mountain ranges

Where can I see an Emu?

What is a Frill-necked lizard?

Perhaps Australia’s most spectacular lizard, and the inspiration for the spitting dinosaur in the original Jurassic Park, the frill-necked lizard does exactly what it says on the packet, opening its mouth and spreading out its collar-like frill when frightened.

Where can I see a Frill-necked lizard?

What is a Goanna?

This group of lizards includes Australia’s largest – the 2m perentie – but also has members as small as 20cm. Otherwise known as monitors, they prefer warmer climates, and are far less dangerous than they might look – they’ll only attack you if you attack them!

Where can I see a Goanna?

Shot to prominence by Steven Spielberg in Jaws, the great white shark is every bit as awe-inspiring as the movie made it look. In fact, much of the shark footage in Jaws was shot in the small town of Port Lincoln, Australia’s shark cage diving capital.

Where can I see a Great White Shark?

Great white sharks can’t be kept in captivity, so the only way to see them is in the wild, and the only place that reliably serves up great whites (and offers tours to see them) is Port Lincoln, SA, where a number of companies run tours.

What is a Kangaroo

When most people think of Australian animals, they think of the weird, wonderful and wildly popular kangaroo. The country’s national emblem hasn’t been slowed down at all by human activity, and can be found bouncing around almost everywhere (outside of cities at least.)

Where can I see a Kangaroo?

The ears, the nose, the fur, the laziness… it feels like Mother Nature was trying to build an animal with maximum cuteness when she created the koala. Sleeping 20 hours a day only leaves four hours for food and photos, so take your chance when it comes – just be careful of those claws!

Where can I see a Koala?

What is a Platypus

When the first platypus specimen was sent back to England for analysis in 1799, experts thought it was a joke – just a bunch of other animals stitched together. You can understand why – duck-billed, beaver-tailed, otter-footed, egg-laying, and with a venomous spur on it’s foot, it is totally unique, but also totally awesome.

Where can I see a Platypus?

What is a Possum

In North America the word ‘possum’ can conjure images of large, dirty and somewhat angry creatures. But Australian possums like the ringtail and brushtail are totally different to their American cousins – more squirrel than opossum, and adorable to boot!

Where can I see a Possum?

What is a Quokka

We’ll say it – there is no animal on earth that is better at taking a selfie than the cute and cuddly quokka (just Google ‘quokka selfie’ for proof). They are a cousin of kangaroos and wallabies, although far rarer – these days they’re only found on a handful of islands off the coast of Western Australia.

Where can I see a Quokka?

The world’s rarest pinniped (seal/sea lion), there are only around 15,000 Australian sea lions in the wild, found on the coasts of South Australia and Western Australia. Happily they tend to hang out in the same spots, so they’re surprisingly easy to find, and very happy to have a swim with you!

Where can I see sea lions & seals?

If you associate danger and death with Australian wildlife, you might be surprised that it’s taken this long for this list to get to it! While the country is home to some of the deadliest snakes on earth, they are found almost exclusively where humans aren’t, and are far more scared of you than you are of them!

Where can I see snakes in Australia?

What is a Tasmanian Devil

When you first lay eyes on a Tasmanian devil, you might wonder whether the team at Warner Bros ever did. A small but ferocious carnivore, about the size of a small dog, they have black fur, a pungent odour, a strong bite and an extremely loud and disturbing screech. Oddly cute though.

Where can I see a Tasmanian Devil?

What is a Wallaby

The adorable smaller cousin of the kangaroo, wallabies are shorter (45 – 105cm) and slightly stockier, but otherwise identical, with many experts putting them in the same genus. There are 30 species of wallaby, including the brush wallaby and the rock wallaby.

Where can I see a Wallaby?

What is a Wombat

Found mainly in South Eastern Australia and Tasmania, wombats are tubby, muscular herbivores that dig extensive burrow systems to stay safe. They are surprisingly big, at one metre long and 20-35kg in weight, and are generally seen lazily waddling around, although they are capable of sprinting as fast as Usain Bolt. And, fun fact alert, their poo is cubic.

Where can I see a Wombat?